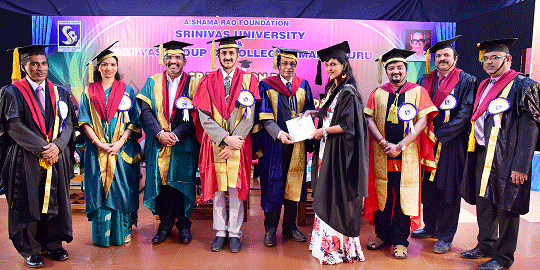 Shama Rao Foundation, Mangaluru, was established in 1988 with avowed aim of imparting education which could mould the character of the students and make them responsible citizens of the country. It was the firm belief of the founder Adka Shama Rao that education is the tool to transform society. Today the foundation sponsors a plethora of educational institutions imparting education in Technology, Medical Sciences, Dental Sciences, Hotel Management, Hospitality Sciences, Pharmacy, Business Management, Nursing, Education and PUC. The foundation is ably led by Sri CA A. Raghavendra Rao and Dr. A Srinivas Rao. The Srinivas Group of Colleges is celebrating its 30th year of establishment.

Dr. Ramesh Unnikrishnan, Regional Officer and Director, All India Council of Technical Education, South West Regional Office, Bangaluru was the inaugurator of the program. Dr. Ramesh Unnikrishnan in his inaugural address said education is the tool for a country’s development, he also briefed about the current education scenario of India. He told about the supremacy of Indian education in the ancient times, he advised the young graduates to take oath in their heart to contribute to the society by encouraging people to get educated. He appealed the young graduates to be proud of their institutes from where they have been graduated and be associated with them.

Sri Naganagouda S J, AVP & Head – Human Resources, Global Edge Software Limited, Bengaluru was the Chief Guest of the programme. In his address he asked the graduates to be grateful to their parents for their sacrifice, love, affection shown on them. He said that the graduates are now ready mentally, physically, intellectually to solve the problems of the society. India is a country of abundance, but the challenge is to build the knowledge among the people of the society. People around the globe had once come to India to get the best education in the world. There is volatility, uncertainty and complexity all over. Technology is a means to solve the problem of the society. He appealed the young graduates to prepare themselves with leadership qualities, attitude and performance and this to be reflected in their profession. He also said that the students need to have passion, patience, perseverance, pace, clarity in life, service is more important than success in life, power and passion is within our self and we need to believe in ourselves.

Sri. CA A. Raghavendra Rao., Chancellor, Srinivas University, Mangaluru & President, A. Shama Rao Foundation’s, Mangaluru, presided over the function. He, in his presidential address, highlighted that the graduates have a long way to go, they need to be humble with good manners, be the shining star and serve the society.

Graduation certificates were distributed to the young graduates of the group by the dignitaries present on the occasion. 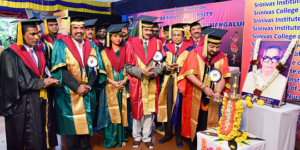 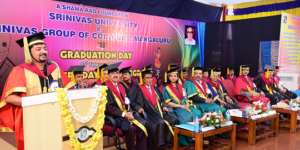